Concorde jumping genes is second to none, with a pedigree containing some of the strongest jumping lines in Europe both on his sire`s and dam`s side. His sire Voltaire combined an excellent jumping career with that as a breeding stallion being regularly ranked in the top 10 in the world breeding rankings of show jumping stallions.

Concorde`s mother also has an excellent pedigree sired by the legendary Marco Polo, a stallion who had a profound influence on that of Dutch sport horse breeding as well as the rest of the world.

Concorde was a leading jumping stallion himself competing across Europe with Jos Lansink, wining many international competitions including the Nordrhein-Westfalen grand prix at Aachen, 2nd at Darmstadt, 2nd at Lanaken, 2nd in the Grand Prix of Amsterdam, 2nd in Helsinki and 2nd in Gothenburg. In 1994 Jos Lansik and Concorde were also crowned Dutch champions. 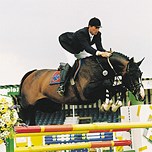 Since his retirement from the jumping arena Concorde has become one of the most influential breeding stallions, his offspring learn quickly and he has had many horses jumping in young horse championships including the world breeding championships in Lanakin. His young stock continues to impress and he has produced in excess of 17 international grand prix show jumpers, as well as thirty licensed stallions in European studbooks. Concorde was awarded "preferent" status with the KWPN, one of the youngest stallions to earn this title.