Horse Website - Darby Ward Triumphs In Moorsele - -Darby Ward (16yrs) from Alderley Edge, Cheshire produced one of the only two double clears in the jump off of seven combinations to secure a British Win in the CSIOP Grand Prix in Moorsele on Carolyn Nevinsons pony Maradonna.

In a competition which saw more than twenty starters in a field that was incredibly strong, Darby was the last to go in the jump-off. At the point of Darby entering the arena the lead was held by Lisa Nooren from the Netherlands who had produced the only double clear to date in a time of 36.73. Darby, known for both her competitiveness and speed in jump-offs brought people to their feet applauding her when she managed to return a clear round almost four seconds faster by cutting inside a tree and back to a fence, something nobody else had achieved successfully when they had tried.

Team Coach, Alan Fazakerley said afterwards Darbys performance was sensational today producing not only one of the two double clears but in such style and with such time in hand was phenomenal. We had a chat beforehand and discussed the turn in detail Im just so pleased that she managed to pull it off in the way she did that resulted in a GB win for us in Moorsele.

Alex Chitty (15yrs) from Gravesend, Kent with Amy Chittys Amilie JRZ and Beth Adams (16yrs) from Halesowen, West Midlands on Julie Adams Some Like It Hot took 5th and 6th place respectively having accrued 4faults apiece in the Jump Off.

In the CSIOCH Grand Prix it was Ella Popley from Haywards Heath, West Sussex who was the highest placed Brit by jumping clear in the first round with Sandra Pavitts horse Amaryllis Van de Heffink. But an unfortunate 4faults in eleven strong jump off saw her slide into a 6th place finish.

The children who hadnt competed in the Nations Cup earlier in show were invited to compete in the CSICH Grand Prix which saw a British win with Emily Ward (12yrs) from Cheshire. Riding Nick Wards and Michael Whitakers horse Witch they produced the fastest of the four double clears in the competition.

Corinne Bracken, Childrens Team Coach and Chef dequipe commented. Having ridden Witch during last season Emily has shown that as a combination they have both improved dramatically and I look forward to seeing her jump at the next viewing trials at Bolesworth in June. Ella Popeley jumped two superb clear rounds on her young horse to finish fourth and I look forward to watching progress throughout the season. Our next Nations Cup with the Childrens teams will be in Hagen, Germany in June. 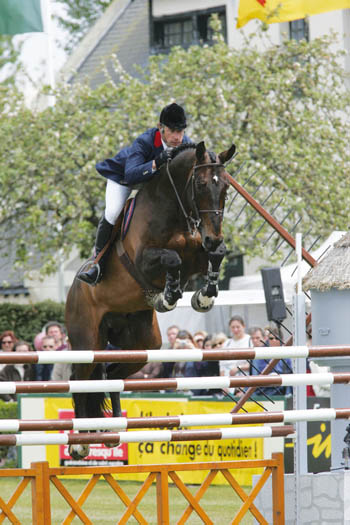